skip to main | skip to sidebar

I have tentatively decided to try out a double format for reviewing books--aka, there will be two posts about each book: the fandom version, posted on my LJ/DW, and the reviewer version (that's you guys). Please let me know if you think it works/doesn't work/is ridiculous/is awesome, etc! :D

Last week I read Alcestis, the debut novel by Katharine Beutner and a subversive, powerful retelling of the Greek myth of the woman who trades places with her husband to journey into the Underworld.


They knew the child's name only because her mother died cursing it.

So springs the title character, in a wash of blood and anger, onto the pages of Katharine Beutner's beautiful book about a princess whose coming of age literally involves going to hell and back. 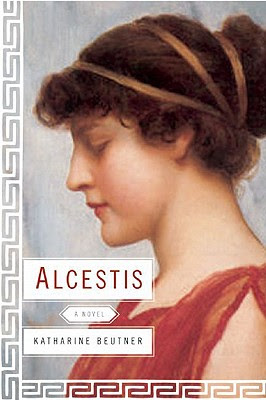 Pick your poison: Read the Fandom Version or the Reviewer Version (below):

Alcestis, careful and proud, lit with mesmerizing flashes of a turbulent inner life, has a quiet, subtly wry voice that moves the first third of this novel quickly through a fluid, shutter-lens view of Ancient Greece. It's hard initially for Alcestis to separate herself from the rest of the maids in the palace of Iolcus. Through Beutner's consistently expanding voice, we see her dawning awareness of what it means to be a woman in a nobleman's court:

All my life I had been given warnings: eyes down, voice soft, knees together. You're different, the servants had told me. You are not like us. We are not like you. A royal girl must lie like an undiscovered island, quiet and empty, skin clear and pure as miles of open shore just waiting for that first footprint, the rut of the hull in the sand, the press of discovery.

I'd listened, and I'd believed them, but I had not cared. Purity came easily to me -- I was young and alone and untempted. But as I watched the dancers, I thought I saw what the serving maids had meant. I was meant for marriage. I would marry, but I could never reveal to a man what was damp and hungry in me, not like these girls, these laughing children, destined to be shepherds' wives or sailors' mistresses, to die bearing or beaten or old. I leaned against the wall and I felt the skin of my inner thighs brush, the dry slide of hot skin and tiny hairs.

Alcestis's grief and yearning for her sister Hippothoe runs deep and strong; overshadowed only by her longing for freedom and agency over her own life. It's no accident that she finds it only when she's already dead.

But death is anything but final: Alcestis' journey into the Underworld moves us into the realm of dark, delicious things--in other words, from purely intriguing to purely AWESOME. (And by "awesome," I mean "hot," and by "hot," I mean I mean "terrifying," and by "terrifying," I mean, "holy crap, The Underworld!" by which I mean AWESOME.)

Alcestis the myth is also Alcestis the woman--her voice is indisputably, refreshingly, feminized and feminist. But Alcestis is anything but that simple; her agency doesn't change the somberness that hangs over her life or her destiny; and fatalism can't cloud this novel's moments of pure delight, discovery, and ecstasy--the sensuous raw danger of the Underworld, with irresistible Persephone as its queen, or Alcestis' transformation into a woman whose life and loves are given back to her, even as she explores the realities and surrealities of death.

A big part of Alcestis' appeal is the pleasure of watching familiar myths interwoven with new stories and new themes -- the knife-edged hospitality rituals Alcestis' father and his fellow noblemen exact; Alcestis's charming but weak husband Admetus, who has secrets of his own; the haunting co-dependence of Hades & Persephone; the way sexuality threads through each of these stories. But far greater is the sheer awareness and vividness of Alcestis' voice, which grows more and more sonorous with the dawning of her consciousness and selfhood, until she echoes in your mind for days after reading, and her final mythical 3 days of silence is nothing if not a shout.

But if Alcestis walks into hell in much the way Edna Pontellier walks into the ocean, her own awakening also comes at a price. Whether that price is ultimately as devastating as Persephone herself, I will leave to you, gentle buyer of books, which you can do at any of the following locations:
at 1:29 PM

Aja
Hi! I've got only a year left to watch all of the 877 films listed in the Sight & Sound Top Ten decennial poll. Join me!